“I was looking at it, and then I thought it would taste like throw-up.” Eight-year-old Myles vividly recounts his first taste of chicken salad at the YMCA of Middle Tennessee’s Summer Adventure program. “Then I took a bite of it, and I ate the whole thing!”

Kids like Myles are discovering new, nutritious meals this summer through the Y’s expanded food program. For the first year, we are able to serve a healthy breakfast, lunch, and snack at all seven Summer Adventure school sites in Davidson County, which provide a safe space, learning opportunities, and all-day care to hundreds of elementary school children.

While the kids clearly don’t sugar-coat their first impressions of the unknown foods, they’re just as honest with their positive responses.

Maya, also eight, wants to share about eating a healthy bean dish. “I thought they would be nasty because I usually don’t like beans,” she explains in her raspy voice. “Then I tried it, and I liked it.”

The Y’s food program not only provides nutrition education for children, it combats hunger. 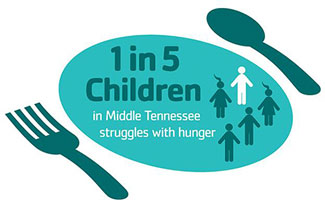 Studies show that one in five children in Middle Tennessee doesn’t have enough food for an active, healthy life. In Davidson County schools, 97% of students qualify for free or reduced lunch based on their families’ low income. But without the school meals during the summer, our Middle Tennessee kids are at an even higher risk for food insecurity.

“We know that there’s a need,” says Alley Pickren, the Y’s youth obesity prevention specialist. “So that’s our number one priority, to make sure all kids get a healthy snack or a healthy meal in our program.”

Summer Adventure serves more than 1,200 free lunches per week, and each one includes all five food groups.

Staff member Porcha Smith says adding the lunch has taken away complaints of hunger from her campers.

“Some of the kids would forget to bring lunch and would say ‘I’m hungry,’” she says of years prior. “Now, it fills in that gap of them being hungry.” Full bellies means full energy for the children to learn and play. Deshon Moore, a lead site director, has noticed an increase in their endurance since the food program expanded.

“They're not doing a lot of sugary foods, a lot of sugary drinks, so they're not just crashing at the end of the day,” he says. “I think those balanced meals are really helping these kids with staying energized throughout the day and really being active and focused."

Serving nutritious meals is a major victory, but getting kids to try them can be something of an art form.

“We have things like watermelon, cantaloupe, grapes—those kinds of fresh fruit items that staff and kids are really excited about,” Alley says. “Then there are other things we have to encourage the kids to try.” Sometimes a double-dog dare does the trick, but other times, it’s not so easy.

Alley shares tips on how to help kids take a chance on unfamiliar foods: All the encouragement appears to have an influence on six-year-old Michael. He sits next to a friend at Summer Adventure and looks at the day’s lunch in front of him: tuna salad, three cherry tomatoes, an apple, pita bread and milk.

After some initial reluctance, he takes a bite of the tuna. Then another. And another.

“I said before I didn’t want to try it,” Michael explains. “Now I like it.”