“I was sad all the time with no energy, and I was tired all the time, and it was hard for my kids and for myself. I was like, ‘What am I supposed to do?’” 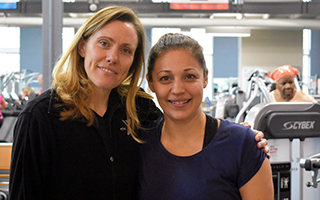 She told the Y's personal trainer, Janet (pictured left), about her goals.

“I wasn’t just focused on losing weight. I was trying to sleep and feel better,” she said.

Janet encouraged her, saying that adopting a solid workout routine would probably make a difference.

“I didn’t believe it. But after like a week or two, the insomnia was gone. My energy was back,” Yomara said. “Everything started getting better and better.”

Even though losing weight wasn’t her main priority, Yomara said she also shed 10 pounds in the first couple of weeks.

“She was killing me!” she joked about Janet’s tough routines. Then she added with a smile, “No, it was really good.”

After a month, Yomara switched from personal training to morning group exercise classes with Janet, who sees qualities in Yomara that can help her carry this new healthy lifestyle into the future.

“Yomara is a very determined woman, very internally strong, very strong character, does not let anything stop her, and is willing to try anything once!” Janet said.

Yomara is amazed at how far she has come.

“I look back, and it’s like, ‘Really, I was feeling that way?’” she recalled.

For anyone else who finds themselves in a similar situation, she recommends giving exercise a try.

“I know the hard part of exercising is starting,” she said. “You have to try. You have to train your mind like, ‘I’m going to do it for three weeks. And after that, let’s see.’ I can promise that you will do it after three weeks.”

It’s perfectly normal for exercise to slowly improve a person’s health. But for Yomara, the results came fast. It’s one story of thousands from Middle Tennessee members growing stronger in spirit, mind, and body. To Yomara, Janet, and everyone else out there working hard to stay healthy, you’re our heroes.